Monica had a varied and interesting career well into her seventies. Retirement didn’t slow her down and Monica became a member of the Spinners and Weavers Guild from the age of 80, and hasn’t looked back since.

I was 15 when I left school with no qualifications. The 1948 Education Act meant the grammar school I was at in the suburbs was turned into a secondary modern school where no GCSEs were done. Carrying on with education meant moving to another school on the other side of town which my mother, being a single parent, couldn’t afford and so I left school and immediately got a job as a hollerith operator with the John Bull Rubber Company in Leicester. I started life as a punch card operator in 1949 and was the only left handed one in the country.

Then an opening came up at Revit’s shoe company with the same hollerith system. I moved to Revit’s and was promoted a few times, before moving to the British United shoe company in Leicester, where the same system was used. My maths wasn’t great and unfortunately I was promoted beyond my ability, which nearly caused me to have a breakdown and I used to dread going to work every day. Then I saw a job advertised in the paper for a medical secretary to cover maternity leave. I couldn’t type but I knew where the keys were on a typewriter so I got the job and thoroughly enjoyed it. At the end of the maternity leave another job came up at a private practice on London Road in Leicester. When my boss sadly died I moved to another doctor for a year before deciding that I really ought to do something about my education. I applied to go to Nactill, which was part of Scraptoff Teacher Training College, set up after the Ablemarle report in 1961. I got a qualification to become a youth worker and that’s when I moved to Dereham, in Norfolk where I met my husband and we married two years later. When we had children I carried on with youth work but on a part time and voluntary basis with Norfolk Education committee until 1972 when the children started school and I applied for a job as an assistant company secretary.

Around this time I started my own crockery hire business with my husband’s help and I did that until he died in 1986. I continued working as a company secretary until I reached retirement age at 60. Having retired, I quickly got very bored and saw a job advertised in the paper for a Custody Assistant at the police station. I was responsible for the welfare of the prisoners: feeding them, fingerprinting, photographing, taking DNA and generally looking after them. I worked for the police until I was well over 70 and only stopped because I was required to do unarmed defence training. Thereafter I started to work voluntarily, first in a charity shop for Cancer Research and now for PACT animal sanctuary.

At my eightieth birthday party a friend asked me if I would like a fleece, and I said yes. When I got it I was a bit astounded so rang someone who I knew belonged to the Spinners and Weavers and they agreed to take me to the next Guild meeting, and I’ve been spinning ever since.

The first fleece I had was from a black Romney sheep; only white Romney sheep are allowed to be registered, but the farmer liked the black sheep so kept it as a pet. I’ve had the second fleece and there should be a third one due any time now but I’m giving that to someone else this time. I spun the wool and plied it and then put two lengths together to make knitting wool. I knitted a cushion for the person who gave me the fleece and then knitted another cushion for their friend and I knitted some beanie hats: my Tai Chi instructor has got one and a friend who does my garden has another.

Shortly after, I acquired an Alpaca from Church Farm at Thompson and a condition of having the Alpaca was that I knitted the farm manager a hat, which he now proudly wears. They are lovely animals; they are very pretty and their fur is very soft, totally different to sheep wool.

It’s amazing because you can actually spin any fur to a lesser or greater extent. I have a Maine Coon cat and I’m going to spin some of his fur. I comb him regularly at the moment and have a big bag full of fur, which I shall treat like alpaca and it will be spun before it’s washed.

I’m hoping to make a Joseph coat with all the different fur and wool. I think that it will all knit together and make a nice coat, either striped or in squares.I bought a beautiful fleece at the Open Farm day last week for two pounds. The man stood there and sheared the animal for me as I watched but the sad thing is that nobody wants them. The wool factories buy them but they’re very picky and they’ll probably get 50p depending on the breed and what type of fleece it is. It is very sad because it brings me such a lot of enjoyment, and so cheaply. I bought one of my spindles off the Internet for about £2.50. And that’s all you need. You can actually do it with a piece of stick if you need to – it is one of the oldest skills. 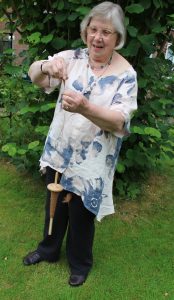 The first thing you do with a fleece is roll it out, what is called ‘skirting it’. You take all the nasty bits that have been round its bottom and underneath its tum and through any dirt. If you soak that in water and use the fluid that comes off it after you’ve soaked it, it makes wonderful fertiliser for the garden, full of nitrogen. Then you wash the sheep wool. I put mine in wash bags and just wash it either with some shampoo or a gentle washing liquid and I spin dry it and put it out on the line. Sometimes I just fill a wash bag with dirty fleece and leave it out in the rain because it washes the dirt out without taking all the natural oils. After that you do what is known as “picking it”: you pull it all out so it is all facing one-way and then it’s ready to be carded and then you spin it. You make rolags out of it that you card it through a carder. I do mine over knitting needles, which is not the proper way to do it but it works. And then you put it on a spindle and start to spin. Or, for speed, you can work on a wheel. There is a lever on your bobbin on the wheel and as you spin your wheel round, it turns it and takes it onto the bobbin and you just keep pulling it out. It’s nice and easy to do, which is why I am trying to become proficient on the spinning wheel. I also bought myself a loom because I want to start to weave. I have woven a little with some of my wool; I wove a sock bag in the round for my daughter, which she was thrilled with.

It’s a lovely hobby and great skill to have. We were explaining to the children on the Open Farm day that everything they’re wearing started life like this, which they don’t realise. And the occasions when I have gone to the hospital with friends I usually take my spinning with me. It’s amazing how it gets everyone talking and having a look and it seems to lighten the whole atmosphere. I always try to get other people to give it a go because it’s brought me so much joy. 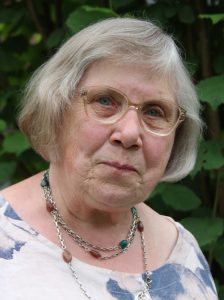