I was born in November 1927 in Marham, and we lived there until I was five. My dad worked with cattle and we moved to Shouldham as he took a job as a cowman.

I went to Shouldham primary school, there were a hundred and ten of us there, it was only half as big then as it is now, I did not qualify for the eleven plus and left school at fourteen.

I had two brothers and three sisters. One brother was old enough to be called up and he served in Burma, the other worked here and there, I did not have to do national service as I was working on the land and the farmer was able to get us out of doing it.

One of my sisters worked in a shop in the village, she got married. One of my other sisters worked at home along with mum, until she married. After she got married they took on the Watlington Angel pub, they were there for thirty-nine years.  Those two sisters died and were buried within a week of each other, and not that long ago.

My other sister is still alive, she is twenty years younger than me, so if I am ninety then she is seventy.

My dad had finished working for Miss Stark by then and had taken over a small holding from an old boy, he had three cows, a horse and a sow, not many acres, perhaps eight or ten. Dad also used to help out on another farm in return for them to come and drill his corn. He was then able to afford a little drill that drilled two rows of sugar beet, he had an acre of sugar beet, or mangolds which was all they were allowed to have then, as the factories would only take a certain amount.

I helped dad on the small holding, I milked the cow, when I was at school I could not wait to get home to do the milking. I had two more brothers and as we grew up and got older dad got another cow, he ended up with eight or nine, I think. I never had any problems with the cows.

In those days you were better off in a small holding like that than you are today, because there are not many small holdings about now, it costs so much money to buy new machinery which by the next year is obsolete.

Life became a bit more comfortable once farmers were getting subsidies, I was then getting benefits , but it all comes out of the same pocket, out of the country doesn’t it.

But I remember dad always said ‘if you can’t afford it, don’t buy it’.

Dad kept increasing the number of his cows so I continued to milk them, but when I was seventeen I wanted a bit more money so I got a job on Mr Hipperson’s farm. It was an agricultural farm, from corn to sugar beet, they did go into potatoes in the end. I was doing general farm labouring work, there were a lot of us working there.

There was no dairy on the farm, farmers never had many cows, although most people had a cow, at one time everybody in the village had a cow. In those days a dozen cows were called a big herd.

A lot of the farms were rented off the Stow estate, I enjoyed the nature around me, you would see the pheasants, which you were not allowed to touch. The estate had the shoot and at one point they had four gamekeepers in the village. There is also the Hare estate there too, they have a rare breeds place on the estate now.

As I was doing the two jobs I was getting up at twenty past five every morning, but I loved it. I would walk and bike to work, taking my packed dinner with me. We then went home to a hot tea, toad in the hole, marvellous.

We had some very bad winters, in one very bad one I remember we were blocked in.  They have said that this winter just gone has been one of the very bad ones , but it was nothing, not a patch on what I knew.

Introduction of machinery to farms and redundancy.

The introduction of big machinery into agriculture meant that they did not want labour on the farms, that is how I got made redundant, It was after the war and they got this machinery on the farm and I worked with another lad and I said to him ‘George they don’t want us’ I say ‘they don’t want us look at the machinery what’s coming in’ ‘oh they can’t replace like this can they’ he say. He was proud of his hedge trimming, well they went and pulled them up anyway.

We had both been in the field picking potatoes and the boss came out and said ‘now that you’re both together I give you a months’ notice. That was just before redundancies came out, if we had waited another week we would have got redundancy pay instead of one month’s notice.

I finished working for Hipperson’s after about twenty years, and went up to work at RAF Marham working for Laurence’s who were contractors working at the camp, the contracts were done by the Ministry. At first I went for twelve months working on the bins. I then got a job with a little builder as well, doing two jobs.

After working on the bins I was working on the maintenance work in the buildings at RAF Marham, you had no training for this, just learned on the job, as you went along.

One of the managers on the floor then came to me and said ‘we’ve got the contract for the sewerage work’, so I went to work on that. We maintained the system, kept the flow for the camp and the quarters, it all went in the big pits. It was a very good job, some people were put off, but not me, it did not worry me one bit, I have no sense of smell.

During my time at the camp Laurence’s lost the contract, a company called Landscape took it over and then after three years Laurence’s got it back, I worked for both companies. With Landscape I worked on the grass and the officers’ gardens.

I think that I worked there for thirteen years.

I enjoyed working outside and enjoyed all aspects of it, especially everything connected with the stock. There were good time and hard times but I had a very enjoyable, varied life on the land

Life in the village, whist drives, dancing and the arrival of the bus

I was born in Marham and if you threw a stone it would hit one of my relations, they would marry and could not afford to go out of the village. My wife and I were married for over fifty years, we lived in a caravan for thirteen of those years.

There were some good shops in Shouldham. Hippersons had one on the green and then there was another one, the name of Batterham at the end of Westgate Street. They employed two sisters who were there for years.

Then they got a bus in the village and we started going to King’s Lynn; that is actually how I met the wife. They were Matthews buses and we would go to King’s Lynn on a Saturday night initially and then on Sundays, the last bus home would be about half past ten. We went there for our entertainment. The bus fare was one and six and it was about one and nine pence to go to the pictures, so you spent wisely.

The village had entertainment too, we had a whist drive every Saturday night and dancing in the hall too. We had a very good football team, playing on Saturday afternoons but I never did get in to it because I had to go and milk the cows. 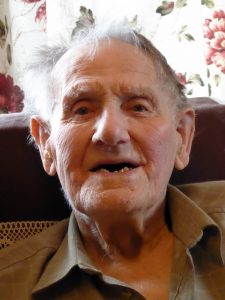