Life on the land

My first job, in 1936, was at Murton Webb’s in Knettishall in Suffolk. We biked the way from Kilverstone to Knettishall which was eleven mile, and eleven mile home and we started work at six o’clock in the morning. We left home about five and started work at six. I worked with horses. When they were carting sugar beet we drove the sugar beet away. As they were filling the tumbrils we were driving them away and tipping them up. That was hard work. When we first started work at Knettishall our first wage was ten shillings and fourpence a week. My mother took the ten shillings and we had fourpence. And the best part about it, Woodbine cigarettes, where we used to go, was tuppence a packet. There used to be slot machines on the wall on the shops. You put your tuppence in, you get your five Woodbines out. And that was your fourpence gone. And that was our treat, that was, every week.

After that we worked for Lord Fisher at Kilverstone Hall. I worked with the horse, a lovely Suffolk horse there called Berkshire. I used to do all the same work carting different things. When there was a shoot I took the game cart out. That was a very exciting job. We had a very good pheasant shoot at Kilverstone. When my father retired we moved from Kilverstone to Spall and we worked at Weasenham Farms. They were all horses in them days, all horses, no tractors. We went all through the war years working the horses, with the Land Army girls leading the horses in the horse hoe. All jobs that come along, you done it. When that’s this time of the year you’d be getting ready for the drilling and in the spring of the year you’d be harvesting the sugar beet. We worked at Weasenham Farms for a number of years. Then it got so mechanised, tractors and machinery took over, so after that we worked at Bodney for Mr D.H. Sanderson. He was a very very good boss. We was on sugar beet. I did learn to drive a tractor for a while but that wasn’t like my horses, no,no.

When we got married my wage was just over nine pounds a week. I was still working for Mr Sanderson when I got married and I had a very good wife. We lived together over 50 years at Great Cressingham. David lived in Spall but we all met up and worked together. I got another brother who died, he was the oldest one. We all worked together and we saw each other every day. All our working lives. We didn’t have a holiday. When we first started working there was no holidays on the land, but after a few years you had three days, three days holiday. We never went anywhere ‘cos you couldn’t afford to go anywhere. When me and my wife was married we went to America once. We had a daughter out in Chicago. That was a big experience. We were there for a fortnight. I did enjoy it.

During the war the Americans were over here. The Land Army girls were working with us, and the men who built the aerodromes, they were nearly all Irish. We didn’t mix with them, they more or less lived on their own. They built all these aerodromes, all over, there are no end of aerodromes round here. That was right at the beginning of the war. Those were very very hard days but very good days. You didn’t keep hearing about murders and rapes. You knew everybody in the area. You could walk into Swaffham and speak to everybody, but I tell you what, if you were walking down the road, you see a man older than yourself that wasn’t do to say ‘Hello John’, you got to say ‘Mr’.

We was always on the land. Always on the land. That’s the reason we’re 95, we’re healthy. That was hard work though. That was very hard, I mean, when you was a-thrashing a comb of wheat, by sixteen stone. There weren’t no automatic lifts, you got to have them across your shoulder. I tell you what though, when we went home, Mother always had a very good meal for us. She’d go round all the shops, get what she could, so we always had a damn good meal. I had three sisters who were all in service, one in Kilverstone, one in Swaffham, and one in Thetford. We always had Christmas Day together. Always met up once a year. But as I say, they were very very hard days but my God, they were good days.

1946-47 – oh my word, wasn’t that a sharp winter. My father died in 1947. The day he was buried they had to dig a channel up to Spall church ‘cos that was in February, had to carry the coffin in. He’d laid in bed and on the Boxing Day they had a thunder storm and after that we had no end of snow, the roads were bunged full, you had to clear the roads and then you had the next driver would be pulling in. You had to go to work with a shovel to clear the roads several times. Our boss paid us to keep the roads open. Otherwise nobody got out, do you see? That went on for a good two months, off and on.

When I retired at 65 I had a damn good rest (laughter). We just had allotments and worked on our allotments. We grew all our own produce. We were always in agriculture. 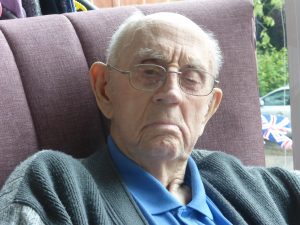