Raymond worked as a carpenter and joiner, and then a gardener, mainly for local authorities in London and Norfolk. He became a full-time carer for his father during his latter years.

I worked for the local authority all my working life in London. Some authorities did direct building works at that time. You did a lot of joinery work for swimming baths and libraries and that type of work then. Carpentry, and of course outside work as well. Unfortunately though it wasn’t a building firm so you didn’t have the full experience on a building site. It was mainly carpentry and joinery. You were supervised by a foreman.

In those days you did day release, one day a week at school or college and two evenings. In my final days of that they did bring in block release when you went, say in two-week sessions, in place of one day per week, and evening classes.

I took City and Guilds Carpentry and Joinery, Ordinary and Advanced Craft exams, during my apprenticeship. As I passed out I still did Higher Certificates in building, which is a full technological certificate in City and Guilds. You had to pass four subjects to qualify. That is all I obtained in building qualifications but I still worked in the trade until early ’75 when I left and came down here to Norfolk to live in February 1975.

My mother originated from this area, and also my father was about to retire from work and bought this property where I now live. I came here on 1st February 1975 and I’ve been here 43 years. I tried to get a transfer in the building trade, but there wasn’t any going so I thought I’d do what my uncle who was in the building trade did, and go into horticulture. So I applied to the local authority down here to work in gardening. I came here as an assistant gardener, and worked in gardening for the rest of my working life down here until I retired early. I’d qualified in Finsbury Park North London and had a session at Burlingham locally.

I worked in virtually every aspect of gardening, except for tree work, around Norwich. Parks, open spaces, even outside on the road verges, Mousehold, Bowthorpe when that was first built for a while. I wasn’t a top-grade gardener, but I did go up the scale a certain degree. You were lucky that you did get a fair share of doing various things and I liked that. You wouldn’t do the planning, it was set out for you, when you did that type of work.

They had a tree gang but I did roughly everything in gardening. I didn’t do a lot of spraying or work on football or bowling greens because that came more under groundsmen’s work.

I took early retirement in 1995. My father was diagnosed with Alzheimer’s before I retired and I became the carer for my father for the rest of his life until he went into care. That was from 1995 to early 2003.

As a carer I did not do any other full-time work. When my father passed away I did join “Babylon” who deal with dementia people. I worked with them as a volunteer for a while and I still visit them as an ex-volunteer. I still go to their sessions to this day.

My father was diagnosed just prior to my early retirement and I went through the stages of Alzheimer’s – what you go through looking after a person with that condition and what it entails, as well as you did attend day hospital, which gradually went up from one day to three days. He went to the day centre at Mousehold and then attended St Andrews Hospital until that closed and was then transferred to Hellesdon where they had a day hospital. My Dad went in for respite a few times during the time I was looking after him.

I looked after him virtually all the time until the final stages when he had to go into care. You learned from experience, from people who had been in that position and knew exactly what you were going through. As I say, it was a full-time job and it took most of your life at that moment in time.

As time goes on through the stages of Alzheimer’s the mind goes. They may not recognize you at times. Or they could be a bit aggressive and on some occasions wander off when they were mobile, which did happen to my father once or twice when he was in the day centre.

Well, he was found by the police, which happens in most cases. When he was actually in my care he didn’t wander off but he apparently did get out of there one day. 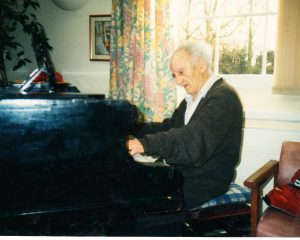 Edward Boylin playing the piano at home in Brundall

There were some good times and you had to take from experience when the best time was to deal with them. They could be a bit aggressive towards you. For example, changing their clothes, they might say, ‘Who are you? Get out!’ and things like that. Another time they might say, ‘I want changing’, or shaving or whatever it was and you would have to pick the right moment to deal with it.

Dad didn’t lose his sense of humour until the end. He did play the piano in this house. He was a pianist, and music stays with Alzheimer’s people virtually to the end of their life. There was a lady in the paper, she was a music teacher and was getting her award for services to Alzheimer’s regarding music. Older people remember the piano that they learnt in childhood right to the end of their life. My father belonged to a singing group, too.

Looking back on my working life, I think apprenticeships should be brought back in all trades in general, engineering or whatever. What I enjoyed most in horticulture was working outside in the open air. I did occasionally work in greenhouses but generally speaking it was an outdoor life. It wasn’t doing the same task day in day out. 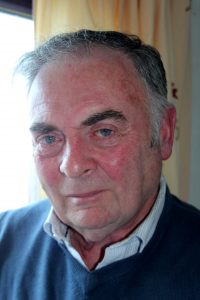