Ruth recalls her working life in the engineering world and her lifelong interest in motorbikes – a true biker chick!

On leaving school – from pressing clothes to pressing metal

I left school when I was fifteen and went to work at Alston’s farm, cycling from Edingthorpe to Witton to get there. I did domestic work, cleaning, cooking and sometimes I had to look after Mrs Alston and dress her, occasionally. I fed the cats and the dogs and did some gardening. I then went to work at a laundry in North Walsham, a three miles cycle ride from Edingthorpe. I did various jobs there but my main job was doing the hospital laundry using presses. They were really big. There was one at the bottom and one at the top and when you pressed a button the top one would come down and press the clothes. It was a really long press and it got very hot so you had to be careful that you didn’t burn your hands. I never got burnt.

After two or three years, when I was about nineteen, I went to Ladbrook’s Engineering at Bank Loke in North Walsham. The factory had been there quite a long time because Mr Don Spinks’s father had the factory before him. When they expanded they moved up to Norwich Road in North Walsham. I did several jobs there, along with my sister, Irene, who was three years younger than me. We’d have to put large sheets of metal through a big guillotine and cut it in to sections, and I also did welding which was unusual for a woman back then. They just showed me how to do it and within about a month I got the hang of it and could do it very easily.

The presses were huge, reaching the ceiling and were so old that when you put the metal into a cage and put your foot down and pressed it, it would go clunk and was really noisy.  They were Myford presses. You had to keep going all day long. Sometimes you could talk but you couldn’t really hear yourself because the machinery was too loud. The bits that were cut off would go down the chute at the back and we had to get them out and put another bucket in at the back of the machinery. Health and safety was very important. I always had long hair and had to have it tied back in a ponytail so it wouldn’t catch in the machinery. When I was welding I had to wear a leather apron otherwise it would have burnt my clothes. There was a big shield on the machine which came down in front of us for protection.

There were about 25 people working there, half men and half women. It was thought quite unusual for a woman to do that sort of work. There was so much machinery and the women had particular jobs on the different machines. We had a bench and a tapping machine where you’d put your tools where you wanted them, and pull the machine down. It was quite noisy. We also had big swing machines which were really heavy to pull. You pulled it with one hand, it would go clunk and a big thing would come down and you’d have to punch holes in it for the different parts of machine we were making.

The pay wasn’t very good, not much more than about seven or eight pounds a week and so much and a farthing. I can’t remember what I did with the farthing!  I used to give my Mum about two pounds and whatever I had left over was about 50 pence for the cinema. Clothes were cheaper then and we just made do with what we had, not like these days when people want so many new things. 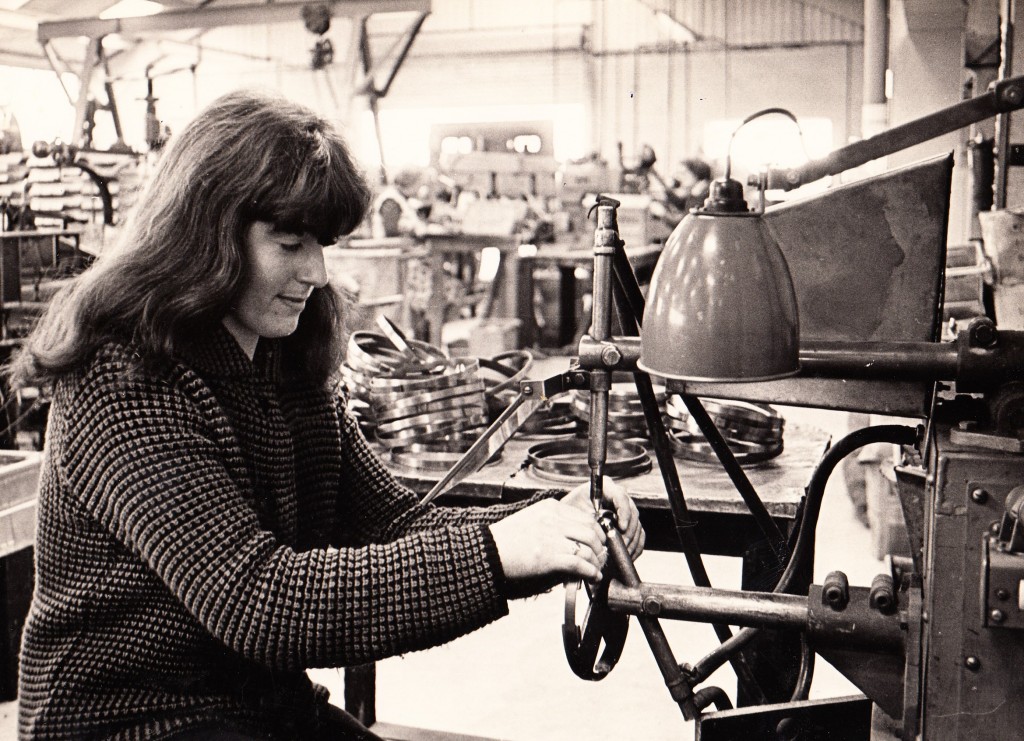 Everybody had to take their holiday at the same time, the last week in August and the first week in September. We weren’t allowed to take holidays at any other time because the factory would shut down completely for that fortnight. During the holidays I would go out every day with my sister. We’d cycle to Bacton beach and lie in our bikinis. We did have a few days off around Christmas and New Year, and also over Easter.

I liked working at Ladbrook’s – it was quite funny at times. I remember Cyril. He was so funny, he did all the sweeping up and he used to say ‘move your feet, there’s plenty on the  floor, plenty on the floor’ as he swept up the rubbish. He was a bit of a character. Eric, who was in a wheelchair, was quite comical as well. He would sing all day long. He would say ‘What sort of songs do you want me to sing to you Ruth?’ No-one played jokes but they were a friendly lot to work with. Doreen Sparrow was quite a character as well. She used to do dipping in the big zinc pot. She’d bring oranges and apples in to work and say ‘Catch, Ruth’ and she’d throw them at me saying ‘There’s one for you and one for your sister’. They did have staff outings and there was a dinner at the Norwood Rooms but I didn’t go because I was unwell. I’ve got a photograph of a Ladbrook’s works dinner at the Norwood Rooms. 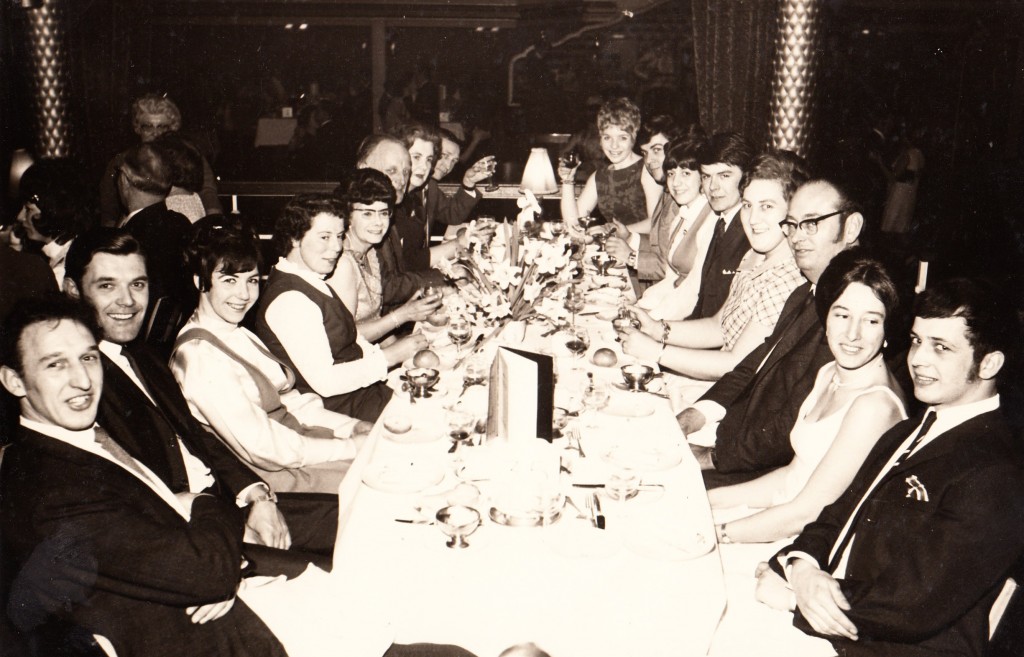 I left Ladbrook’s in about 1969/1970 when I got married. I met my husband at Edingthorpe on his motorbike. I was a bit of a tomboy, liking motorbikes and working in an engineering factory as well! I only rode motorbikes on the back as a passenger. I never drove one. I still go on the back of my son’s big motorbike.

After I got married I got a job at the plastics factory, making baby pants for Mothercare, putting studs on them. Myra, who worked with me, did that end and I did this end! The factory’s expanded since I worked there. I lived on the Mundesley Road then, not far from the factory so I would just cycle down there. We did a lot of things for Mothercare, changing mats, bags and we also made things you put your records in, like the one I’ve got round the back of the chair. The factory is really big now and I believe it may be called East Coast Plastics. I worked at the plastics factory for about two or three years and stopped work when I had my children.

I think the best job I had was working at Ladbrook’s. It was quite fun. The worst job I ever did was cutting big sheets of metal on the guillotine. They were really big and very heavy. My sister did a lot of that, one side and push it through. Really heavy! I must have been quite strong then but I’m not so strong now. I never cut myself but you did get little slivers of metal in your fingers. This old boy, Eddie, would get his glasses on, like this, and say ‘Come here Ruth, I’ll get it out for you’.

I think I would have enjoyed doing an engineering course but at the time there wasn’t much available like that. There may have been something in Norwich, I suppose.  I do know about engines and regularly watch my son, Mark, put exhausts on, take tyres off, jack his motorbike up on the stands, and work on the brakes. I’ve watched him drain the tanks out and replace them on his motorbikes, and put new seat covers on, so I know lots about motorbike maintenance.

My husband was also a biker but sadly he died some years ago. He could put a motorbike together from scratch, put it all together as it should be and it would start! I would help him as I was really into motorbikes, bit of a biker chick! In our spare time we enjoyed being on the motorbike, going down to Bacton and taking a walk along the beach, things like that.

I did enjoy working on the big presses and everybody was so friendly, particularly Margaret who I used to see but, sadly, she died a year or two back. On my wedding day one or two of them threw confetti over me, put confetti all down my back, including the box! That’s the sort of characters they were. ‘I’ll get you on your wedding day, Ruth’!