Pauline talks about her working life in the shoe business and keeping a shop.

She was born around the now Hotel Nelson (Norwich) area to a very hard life. She met and married my Dad and had a shop in St John’s Street near King Street Norwich which had a lovely community which was all knocked down in 1963 and all the residents were rehomed to Heartsease or Mile Cross.

She may well tell you how she hid in a doorway on Prince of Wales Road Norwich with a German fighter firing all guns down at her and her sister and her husband, who got in the doorway first and left the girls on the outside! Men – don’t you just love them!!

It wasn’t so very difficult to get my first job as what it is now. You were always able to get a job in the shoe factory and I started at the Co-op factory. My sister worked with a girl and she said she ought to put me in the shoe factory.

Well I loved it, that was nice and I got on very well at the shoe factory. But at the same time I used to tap dance, at Christmas time mainly. I had about five or six pantomimes in the Theatre Royal in Norwich and I had to ask for leave at Christmas which was very difficult. But I used to have the afternoons off and go and do the tap-dancing and the show at night-times but they were mainly pantomimes.

There were eight of us girls; we were in a troupe called ‘Madame Osina’ and the girls were picked by a woman from London. Mrs. Thompson, I think her name was.. We used to be regular with her. We got five pound a week which was a white five pound note. And, oh, that was lovely when you think about that, ‘cos I was only earning about say seven and six and twelve and six in the factory then. Because I was only a teenager.

With this particular work you were put beside somebody which shew you what to do and we all had a special job like cleaning the shoes and boxing them up and that day those shoes weren’t very expensive either. The best of shoes were only about twelve and six and the cheaper ones were seven and six, which we could buy if we wanted them. We used to have help from other people and they sort of took us little ones – which were about fourteen – in hand and shew us all what we had to do, cleaning and boxing and that. And we had a foreman that was very fair – he was strict, you had to be strict, you couldn’t do as you liked. But we really enjoyed it, working there.

Before it was a shoe factory, that was where they made small planes [Spitfires – Boulton and Paul’s factory] years ago and I think there was a lot of asbestos and that in that then. That wasn’t very healthy in regards as this here white stuff falling about – but we never had no idea what was going on. Never had no idea what it was then but then every time it came, it was getting worse and worse, the chest trouble.

We all got on very well together and I was put beside the forewoman … but she was lovely, you know she tell me where to do the work and that.

I think I had a bit of asthma then, but I had problems, you could tell… we all got it. In the finish my husband worked at the same factory and he died of lung cancer. But he was a foreman and I was only the worker. I used to have to go and help him in his packing department, ‘cos he was in the packing department, and he used to do Russian orders and things like that. He used to sit in my lounge and sit and do all them night times when he came home, he was a bit more brilliant than what I am. Anyway, when used to go up to his room and help him. There used to be a job in which you packed twelve in a box of shoes and there was another one where you packed seventy-two. Well I had to pack the seventy-two, one, because I used to say to him, ‘Oi, you’ve given me the biggest boxes to do.’

So he says, ‘I can’t give you the smallest ones just ‘cos you’re my wife.’ He was really as strict with me as he was the other people. But I always had the harder work because you see you got to prove that you were going to help. This was while I was working there, when I first went there.

Some of the people in the shoe factory used to torment the younger children. Once they got a mouse and tapped it on the head and put it on my bench and upset me. That was rough!.

It was mainly men in the making rooms and the pattern rooms. The ladies were in the machine rooms where they done the machining of the uppers and things like that. My brother was in charge of all the heel charging, you know and things like that, what they had to cover the heels with. I was taught the same way.

It was during the war. We used to go down the dugouts, night-time because of the bombs. I lived in Rose Lane [the Prince of Wales Road area of Norwich]. and a bomb hit Wilmot’s, a little shop for everything radios and toys. One of the women I worked with got killed. That was terrible then, the war. That wasn’t the only thing, the least little light that was shown and that was it.

Some of the shoes were utility, as I say there was utility ones which was about seven and six and the better shoes was about twelve and six.

Pantomimes and entertaining the Americans

We did only the main season at the Theatre Royal Norwich – you know, pantomimes, it was all pantomimes at Christmas. Everyone was fairly good but even the manager of the factory, he said no at first and then he said, ‘oh well, go on then, you can have some time off and go’.

I used to be in a troupe called ‘Madame Osina’s Troupe’. That was tiring but the money was good. The first five pound I earned in the pantomime, I went and bought myself a green dress with spots on it at Richards at Bank Plain [Norwich].

We used to go out to the American airbases, and we loved going to them. We used to come to where I live now (Parkland Road, Norwich). It was a field, with barrage balloons tied up on it and a small airbase.

The airmen were in the audience with those little leather hats on – nothing like what they got now. And they’d be calling the squadron out to go, you know, to fly off bombing and that sort of thing. That was terrible really but we loved going as children because that’s the only way we got ice-cream.

In about 1949, I was running a greengrocer’s shop with my husband. It was only me and him in this little shop. We used to work ‘til nine o’clock at night, me and him working, filling the shelves up, making it clean and so-on.

My husband used to go down at six o’clock in the morning. Finally he employed me and he was only allowed to give me five pound a week for housekeeping and helping in the shop. And believe it or not, I used to save about fifty pence of that in the bank. I had to get married on the Easter Monday, because that was the only day we shut. We priced up everything in the shop, so we could have a week off for a honeymoon!

For about twelve and six people would buy everything they needed for a week. We couldn’t afford a till when we went there. We had a drawer underneath the counter. We stood behind a little counter.

We did have one or two customers try to cheat us. There was one particular woman; she used to do it on eggs. And, ‘cos you were only allowed one egg (because of rationing) and she’d bring her eggs in and say ‘look, this one is bad, this one was bad’. When it come to it, there was a stamp on it and it had been bought off the market.

You had to take the ration coupons to City Hall and then they’d give you a credit to get some more stuff for the shop. At Christmas I used to go round the wholesalers and say, ‘any tins of salmon?’ We used to try and keep tins of salmon and a tin of fruit for everyone for Christmas. I used to push my daughter in her pram and they’d say, ‘oh well we’ll let you have three or four tins’. And we gradually built them up ‘til Christmas for customers’ treats.

There used to be bananas come in, in those long trays and when the bananas came in they’d queue up. They knew! When they see the boxes they used to come up and queue up for bananas. That was interesting and they were all like your friends. But you couldn’t be friends with just one of them, you know. You couldn’t say we’ll let you have this and you’ll have this, because you couldn’t. Because you’d spoil your trade.

Gradually the area went down. There were a lot of bad girls hanging around the Yanks and they were bad girls. We were among the last to come out of St John’s Street. We were all rehomed to Mile Cross.

Back to making shoes

My husband and I went to work at Maclaren’s the shoe factory. They had a leather shop up the road, which made handbags and my husband was working there and then they transferred him further down to the Ring Road and then that’s when they started the shoe business. I went back part-time. [It belonged to the same company Maclaren’s handbags – Pell Footwear.]

It was a bit better because it was a more modern factory. That was a lot better but the Co-op itself was where they were making changes. 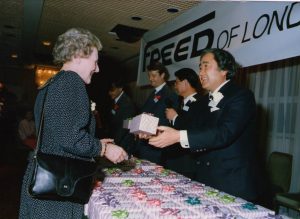 Presentation by Freed’s in London

I was sixty-six when I left work in 1993. I’d worked for Freed’s making dance shoes that you see on the stage. It was Japanese-owned. The whole factory had a day out in London and we met the owners and I got presented with a lovely clock. We went in the Savoy Hotel. I got the letter thanking me for all the work I done. 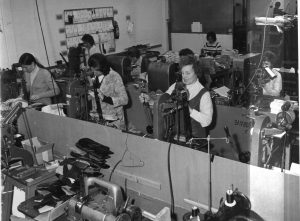 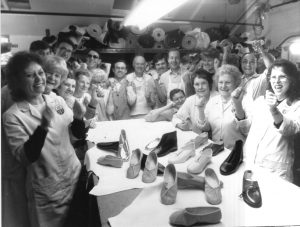 Shoes made at Freed’s

I went tap dancing and then I wound up making dancing shoes!