I came to Norfolk from Wales. I swapped the hills and valleys of Wales for flat lands of Norfolk and the big sky and that would be in 1972. I started at the Coypu Research Laboratory when the Ministry of Agriculture and Fisheries & Food was looking for people. It was in Jupiter Road in Norwich. So, I applied for that job and I got it and it was really to fact-find about the coypu, how far they roamed, and what they ate and so on. Just to get basic kind of information.

Early concern about the coypu on the marshes

Just by way of background, the coypu were farmed originally for their fur. They are a semi aquatic mammal from South America originally. The fur was called Nutria and they used to make it into fur coats and whatever else and then, with the advent of nylon, basically the trade fell apart and people simply let the animals escape, I guess, or they weren’t maintaining them. Anyway, there was a thriving population in the waterways of Suffolk, Essex and mostly Norfolk.

And there were a lot of conservation worries that the coypu would be doing damage to the banks of the rivers and burrowing ‘cos in South America, in the southern United States they were doing that. And also that they were eating precious flora which were unique or indigenous to the Broads. So there was a big lobby about that and so the Ministry sort of upped its efforts to gain information.

I started out setting out traps and mapping where the animals went so we had to trap them and then anesthetise them and then mark them. In those days they cut the webs which was horrible: I hated that. So they switched to tags which were put in their ears with – we used to make them ourselves – make them up in the laboratory and so we tagged them through the ears. So, we knew which ones they were and just at a glance but you knew which ones they were quite quickly.

So, there I was in my Ministry Land Rover going out to the marshes first thing in the morning with this huge, big sky. Fantastic! Really, really lovely. Tremendous job really: I couldn’t believe how lucky I was. And very soon I met up with a reed cutter whose name was Fudgy  I think it was and he was right Broad Norfolk and quite friendly and I couldn’t really understand what he was saying and so nodded and smiled at, what I hoped would be, appropriate moments.

But he was interested in ‘them damned great rats’ as he called them and so I explained a bit of what we were doing because, at that time, they had an outfit called Coypu Control which was kind of river based and it was paid for by the counties and so on. Their job was just to kill coypu and they trapped them and made a great show of paddling about with binoculars and guns and stuff. But the real way of catching them was trapping and really the only way. There was a kind a bit of rivalry I guess between Coypu Research and Coypu Control ‘cos we were the scientists doing stuff.

So, I got friendly with Fudgy. We used to sit and have our dinner together: our sandwiches. And I remember them with their plastic boats going by. Plastic boats with steering wheels which I thought of as sort of floating Ford Cortinas really as they were particularly ugly. And we were sitting one day, a lovely day in May, I think it was. There was some girls sunbathing on the decks of these plastic craft and I was eyeing them up: I was a young man in those days. And I remember him saying to me, ‘you can look boy but age’ll geld you. Age’ll geld you!’ It was one of his memorable ones!

And we used to go to the pub at the Reedham Ferry sometimes as well and I remember one day he’d set fire to the reed beds ‘cos after they cut them, they fire them because it brings the ash back into the soil and then fire engines were called and everyone was blaming him and the sky was dark with smoke. It was quite dramatic. And I think a bit of a wind got up which I think pushed the blaze across the road and great drama!

Another time one of these plastic craft had stopped and he gave it a tow back. He was towing it back to the ferry where they’d probably be mended or they’d send somebody up to tow it all the way back to wherever it came from. And so he’s in his reed cutter’s boat which is a lovely, rather narrow for what they were doing. But I suppose you could get up the little dykes and ditches with it and he had a huge pile of reeds on the back. I mean – just massive and suddenly the owner of the, or hirer of the plastic craft, couldn’t resist trying to get the engine to start again and of course it caught, started, rammed into Fudgy’s boat, turned it sideways and it was an astonishing sight! This guy desperately not knowing what to do and Fudgy giving him such abuse. It was marvellous. I rarely heard such invective, without repeating himself: it was just fantastic! I wish I could have recorded that actually.

So, then I had to go into different areas and so I had a boat, a little dinghy with an outboard motor and so I would motor up and down the rivers and into the broads and it was just marvellous, marvellous times. And getting to the broads that you couldn’t get into on foot and setting up traps and the rest of it. I think we had to change the equipment because it was so heavy and bulky and I just made a sort of PVC cover for it, for the traps so it was much less stressful for the animals and lighter for us to carry about.

I remember some people came over from Holland once and wanted to see what we were doing and we piled them into the boat. And of course, with the more people in the boat it’s heavier, and therefore my usual sort of daredevil swinging it round the corner and then cutting the engine and letting it just drift into wherever I was going to get out backfired rather badly as we came haring round with a huge boat wave. I cut the engine and instead of putting into reverse and we slammed into the bank and sort of practically knocked these guys out of the boat!

Wildness of the marshes

The marshes were wonderful then. It was so much wilder than it is now. There weren’t so many craft on the river. There was far more, it seemed to me, wildlife. You used to see hares boxing, I’ve seen weasel chasing an enormous rabbit and it wouldn’t let go, just kept following it and following it and eventually tiring it out and jumping on it and killing it. Astonishing. And then the moorhens: I’ve seen the moorhens drowning their chicks if they have too many. They will actually peck it and peck it, and push it under until it dies. That’s kind of what nature’s like I guess. But some things I never forget. Just the winds, the sky and the birds and the bitterns. Just absolutely, absolutely fabulous. 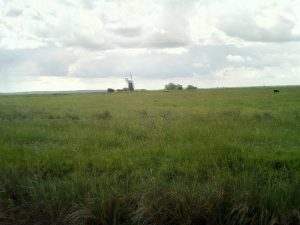 So, there was a big effort to eradicate the coypu. A lot of it was pushed by the conservation and the farming industry. And unfortunately, the population estimates were wildly out – just wildly out. So, the Coypu Control kept increasing its numbers and I think certain people began to side with the coypu and there was a broadsheet down in Waveney Valley called the Waveney Clarion and they ran a little comic strip about coypu. It was Coypu Corner I think it was called. Anyway, it had wonderful illustrations and they set them up very much as in fighting the dreaded Coypu Control doing various kinds of tricks hiding in ducks’ costumes and things like that. And I have to admit I did meet with them and pass on little bits of information from time to time! Which was a bit iffy because you know you have to sign the Official Secrets Act when you join the Ministry. So, they sort of portrayed them as good, honest, yeomen being forced out of their places by the horrible landlords of the farmers and the Coypu Control. There was a sort of backlash.

Being sad to see them go

I enjoyed the coypu – I liked them. I thought they were a good addition to the fauna. I didn’t really see them digging huge holes. I didn’t see them laying waste to huge fields of sugar beet but that was the cry of the farmers. I guess the worst part of my job was when I had to cull the animals after you’ve trapped for a certain amount of time ‘cos you get kind of fond of them really and recognise them – that’s M11 or that’s F13 – and the little ones are really very cute. 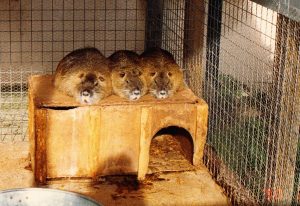 Also, they make good eating ‘cos they’re semi-aquatic, they’re vegetarian and they do actually taste a little bit like chicken: a cross between chicken and rabbit! And because we were opening them up at the laboratory to see what they’d been eating there was plenty of carcasses about. So, I used to cook them up in a stew. And my co-worker, he made himself a sort of Davy Crockett hat out of coypu skins.

I was sad to see them go. Or, like I said, the estimates were so wildly out. All they really needed was just to increase the trapping load and that would have done it. My colleague had prepared a huge summation of all the work to date and pointed out how flawed it was and I think eventually they took note of that and simply doubled the trapping load. I think they’ve more or less disappeared now which, although you occasionally, you get someone saying there’s been a sighting of them.

So, that was my time on the marshes. I enjoyed it enormously. I was there for 2½ years and then I moved on to go to university as a mature student and do teaching in the end. 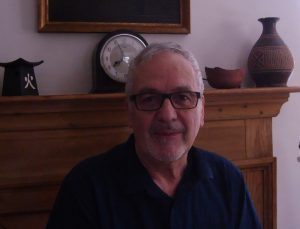 Kurt talking to WISEArchive on 15th May 2018 in Norwich