I left school early because my mother was ill and I had to take care of her and jobs were easy to find then. So when I left school I first worked at Annesley Hotel on Newmarket Road. I made the porridge and Peter, my second husband, helped out in the kitchen. There was a chef as well but I used to make a saucepan full of porridge for the people who came for breakfast. I’d do the washing up, wiping, wiping down; everything. Jeanette was the kitchen maid and waitress and I was the kitchen maid.

After a while, about a year later, I got fed up so I worked at Lamberts on Hay Hill in Norwich on the BOP tea. [Broken Orange Pekoe tea, a speciality at Lambert’s]. They sold varieties of tea and coffee.

I used to work with the tea, wrapping it up and tying it with string; you had to work with your hands in those days. I was made redundant from there and I thought, ‘Where can I go now?’

I went with my mates to work at Bullard’s, the brewery on St. Margarets. It was just after the war and I was still a teenager and not old enough to drink anything apart from tea! I was single then and, you know, you could choose any job in those days.

And so I worked at Bullard’s Brewery on St. Margaret’s with my work mates, Jimmy and Annie, and we all worked on the corks.   Men would pull big corks out of the bottles, we called it’ knocking out,’ and then the bottles went through the washing machine.

The bottles were filled with beer after the washing and then they passed on to the ‘crowner’ that put the crown cork on. I worked on the crowner sometimes.

When we had spare time, we used to have to go to the other side where the directors were and where the wine was. We’d sniff the [empty] bottles to see if they had any disinfectant or petrol in them. If they had anything in we’d destroy them, they weren’t used.

You had to sniff them but I’d get tiddly and feel dizzy! Anyway, Beatie, the forewoman would ask, ‘What’s the matter with you Maureen?’ She said it was sniffing the bottles and wine and she took me off them; I’d had enough. We’d also pass the time doing other things like going across the room and washing down and keeping things clean.

Well I only went on once – that was enough! We went up and down the old tracks, oh, my goodness!   If that didn’t make you feel dizzy, nothing would.

So of course I said to Billy I wasn’t going on there anymore.

I said, ‘No! I’d sooner go on something that’s flat and amuse myself with the girls’.

I was allowed to have a drink by this time so before we left I had a shandy. So when night-time came and it was dark, everyone wanted to wee, so we had to stop the coach. Well… the men’s coach conked out – there was a coach for the men and one for the women. So we had to all ‘pal up’, so to speak, in one coach with the men sitting on the floor. We were told if anyone wanted to go outside, to have a tiddle to let them know. So we all put our hands up and we said, ‘we want a tiddle.’ So it stopped and of course I sat on a purple thistle; it was dark and I sat on a purple thistle and it pricked me something rotten.

The foreman, he say, ‘What have you done Maureen?’

‘I sat on a purple thistle.’

‘Do you want me to put any calamine on it?’

‘No thank you!’ That was being a bit cheeky! Of course that was then and we didn’t know much.

I think I stayed at Bullard’s about two years at the most. I’d married in 1949 and wanted to have children.

After I’d had 6 children, 2 sets of twins, we moved from Cadge Road into Music House Lane in the city and I started work at Colman’s. My daughter worked there already in the mint department. So she said, ‘Why don’t you start work at Colman’s?’ So I got a job there working in the kitchen and it was at a time when we had to do almost everything from start to finish.

Everyone in the newspaper photo worked in the kitchen. We prepared the food and served the food; did everything. Brian was a very good chef and there was John who worked with the chef and all the waitresses, washer-uppers and wiper-uppers.

Next to the canteen is a place called The Abbey. Well, we had to change out of our overalls and put on a little white pinafore to waitress over in the Abbey. It was the dining hall for the management. We used to sort things out and get the dining plates and tea plates ready and the silver service; that sort of thing.

When we’d served up and they’d finished eating we used to start washing up again. And we’d get to eat the afters, which was very kind of them. In those days girls got hungry as well as boys.

It would be different meals to the meals we served in the canteen; they were for the ‘upper class’. I didn’t meet any Colmans. I knew Jeremiah because his name was up there on the photograph. There were photos all over the dining area.

I stayed at Colman’s for three or four years. I married again in 1976, to Peter, and all my family, my daughters and sons came to our wedding.

I’ve enjoyed my working life, even when the children were at school I used to go and help in the Henderson tuck shop. That was the Henderson and Gurney school in Bowthorpe. It was knocked down [1990] and they then moved the fire station from Bethel Street to the old school site and now they’ve moved it again. 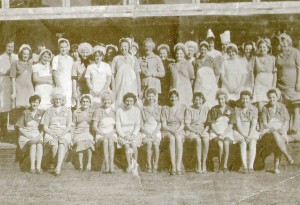 Peter and I finished up working together at the Crown Court; the Old Shire Hall on Castle Meadow. I worked there for about three years as a cleaner before Peter got a foreman’s job there. And if we were cleaning and the High Court Judge went by, the red judge, we had to bow our head and then stand up straight.

I polished that floor so much that one of the red judges slipped and broke a tooth! He was quite good about it though, thank goodness. It was the way I’d polished it, because it wasn’t very good when I’d started there, and we all mucked in and got it nice and coloured but a bit dodgy underfoot.

One time when Peter was working the cleaner came screaming and saying there was a dead body up the other end. She was shaking and I thought, ‘Oh, I ain’t going to look’ so Peter said he’d go down’. It was an old ‘dodger’ who wanted a night inside in the warm. And we didn’t even see him. He was ‘dodgy’, you know, he used to hide up in a room and we’d lock up behind him. That was what he wanted; the judge said he’s always doing it.

Another time one of the windows was broken. It was smashed and we don’t know who did it; they were always on Castle Meadow, throwing things. This was about 1979. I worked there for about seven years. I had a stroke, brain haemorrhage, and we had to leave.

Peter was called the ‘hall keeper’, it was the same as a caretaker really and he had to make sure everything was cleaned and tidy. He had about eight cleaners there other than me. One time we had the Lord Chief Justice come down for a week – Lord Wolfe. He sat in the court with an armed guard.

Another time we had some gypsies in and they called Peter by his name – Mr. Gedge. Peter asked me if I had given them his name and I said, “No!” Peter took a little bit of stick over that from the police. Mr Gedge you know!

We were quite an important couple in terms of looking after Norwich’s Crown Court and we looked after it as best we could. We lived in the house beside it and we did the garden and we grew flowers.

If there was a late court anytime we used to make the judge tea and toast. We used to do rounds and rounds of toast.

Maureen Gedge interviewed for WISEArchive in Norwich on May 8th 2015