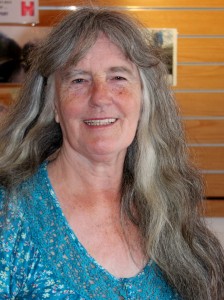 When I first left school I biked from Edingthorpe to Witton and I worked at Alston’s farm, I did domestic work. I did lots of things – I did the cleaning, the cooking, and sometimes having to look after Mrs Alston even to dress at times. Feeding the cats and feed the dogs. Had to do some of the gardening.

Can you describe the presses for us a bit?

It was just really ever so big. There was one at the bottom and one at the top and you had press a button and then it would come down and press the clothes. It was a really long, long press, and really very hot so you had to be careful with your hands that you didn’t get burnt. I never got burnt (both laugh).

I did it for about two or three years, so then I would have been about nineteen then.

I went to Ladbrook’s engineering. It was at Bank Loke in North Walsham then. It was the old factory then and then as they expanded they had to move up to the Norwich Road in North Walsham.

I did lots and lots of jobs there. On a big guillotine on big sheets of metal with my sister and we’d have to put all this metal through and cut it in to sections and I did welding.

That’s unusual for a woman to do welding.

That is isn’t it. Well really they just showed me how to do it within about a month I just got the hang of it and I could do it very easily.

They were really huge presses so they used to reach the ceiling, they were so old and so big and they used to make real noise and they used to go clunk when you had to put your foot down and pull a cage and put all this metal in and press all these things and metal things, it would go clunk and it would be really noisy (laughs).

What about health and safety? Was that important then?

Oh yes, very. I always had long hair but we always had to have it tied back in a ponytail so it wouldn’t catch in the machinery. When I was welding I had to wear a leather apron cos otherwise it would have burnt my clothes.

We had to have a shield in front of us on the machine there was a big shield come down that used to protect us.

My sister Irene worked there as well; she’s about three years younger than me.

It wasn’t very good. In the end I can remember not getting very much more than about seven or eight pound a week and so much and a farthing, apparently.

A farthing (both laugh). What did you do with the farthing?

I can’t remember that!

Were there a lot of other people who worked there?

Oh there was. I can remember lots of them really. It was quite big. I can remember, I think about it must have been about twenty-five worked there when I did. Half men and half women.

So was it thought quite unusual for a woman to do the sort of work that you were doing?

Well I expect it was really. Before I even worked down the old Bank Loke factory I think that was there quite a long time because I think Mr Don Spinks, his father before him had the factory before him.

So what sort of jobs did the other women do in the factory?

Well they had various jobs really because there’s so many much machinery and we all had our individual jobs to do and we had a bench and it was called, tapping, on a tapping machine and you’d go like this and pull down and put all your tools what you wanted there and pull this down and that would make a noise as well. And then we had big swing machines as well and they were really heavy to pull. You had to pull it with one hand like that’d go clunk and this big thing would come down and you’d have to put holes all in these things for these different parts of machinery we had to make. 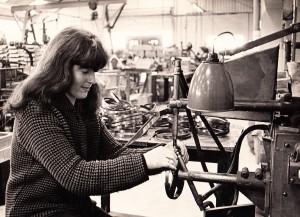 And did it hurt your ears?

Not really. I think we got used to it really but it was quite noisy in there (laughs).

Do you think it affected your hearing? Not really.

We used to take a packed lunch and have it in the canteen. They didn’t provide it.

We always had to have the same holiday – the last week in August and the first week in September. Everybody had to do that. We weren’t allowed to take holidays any other time, we had to take it then when they said, just everybody had that fortnight and the factory would shut and we’d all have a holiday.

Where’d you go for your holidays?

Out everyday with my sister – we’d cycle, go on Bacton beach and lay in our bikinis (both laugh).

And did you have time off at Christmas and Easter, or not?

We did. A few days before Christmas time and a few days in the New Year we’d have off. And obviously Easter holidays.

That was really quite funny at times.

Tell us a funny story.

Well, he, his name was Cyril and I can’t remember his surname but I think he’s died now but he was so funny, he did all the sweeping up and everything. And he used to say ‘move your feet’, there’s plenty on the floor, plenty on the floor he’d go, you know there’s plenty of rubbish what he’s sweeping up. He’s a bit of a character. And there’s an Eric in the wheelchair but he’s died as well but he was quite comical as well. He was just sing all day long. He would say ‘What sort of songs do you want me to sing to you Ruth?’ He’d sing along all day long. He was quite a character, yeah.

Did they play jokes?

Not really, but everyone was ever so friendly. They were a friendly lot to work with. Then there’s Doreen Sparrow, she used to do sort of dipping in the zinc, big zinc pot, pit thing and she was quite a character as well. She’d bring us oranges and apples in to work and she’d say ‘Catch, Ruth’ and she’d throw these oranges and apples at you and she’d say, ‘There’s one for you and one for your sister.’ (laughs)

Did you used to have staff outings and things like that as well? 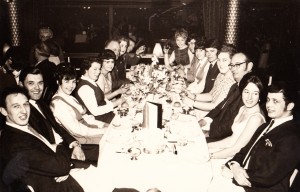 So how old were you when you left Ladbrook’s?

Oh, it would have been about nineteen sixty nine, seventy cos I got married from there.

Did you meet your husband there?

I met him at Edingthorpe on his motorbike (laughs).

I can see that motorbikes were very important to you and there you were working in an engineering factory as well (both laugh). Is that a coincidence?

So did you used to ride on the motorbike?

On the back, passenger, yeah.

No, I never drove one, no. Still go on the back of my son’s. His big motorbike out there, I go on there as well, still.

After Ladbrook’s I worked at the Plastics Factory. I was making pants for the babies, for Mothercare and we had to stud all these things on the baby pants. And Myra who I worked with, I did that end and she did this end.

The factory’s changed a little bit since then; it’s expanded since I worked there. But then I worked there after I got married. And I lived on the Mundesley Road then and I just used to cycle down to Plastics which wasn’t very far. I did quite a lot of things there. Mothercare bags and a lot of things we did for Mothercare. I think they still do it now. But really it’s expanded since then. Got really, really big now. I don’t know if it’s called East Coast Plastics now.

We made a lot of things for Mothercare really. Where you laid the baby on – a changing mat, yeah. And also things where you hold records which I’ve got up the corner of my room, round the back of the chair. We used to make them as well, where you put your records in.

I must have been there about two or three years. I didn’t work any more after that.

I had my children (laughs).

What’s the best job you ever did?

Working at Ladbrook’s I think. That was quite fun.

What was the worst job you ever did?

I think cutting these big sheets of metal on the guillotine I think. I mean they were as big as that mat, they really were really big, really heavy. I mean my sister probably used to do a lot of that, one side and push it through. Really heavy! So I was quite strong. I’m not so strong now but I must have been when I was younger (laughs).

Do you ever cut yourself?

Not really. Probably got little shivers of metal in your fingers which there’d be this old boy named Eddie and he’d get his glasses like this and he’d say, ‘Come here Ruth, I’ll get it out for you’. (laughs)

So you didn’t have a nurse or anybody to get it?

Did you ever think about doing an engineering course yourself?

I probably would liked to have done but at the time I don’t think there was really much available for me in doing anything like that then, not in them days. Probably could have been something in Norwich somewhere but I’m not really sure where that would have been.

But you know about engines.

And I know your husband was a biker. You lost him rather sadly some years ago. Did he used to work on?

And did you help with that at all?

I did, I was out there with my husband’s as well. So I was really into the motorbikes.

Yes, a bit of a biker girl.

You were only fifteen and you had quite a lot of responsibility in your very first job. And you were saying that you didn’t really earn very much money. How did you make that money go round?

Well, I used to give my Mum about two pound of it and whatever we had leftover really was just like fifty pence for the cinema which would be and different things like that. I mean the clothes were cheaper them days, wasn’t it. I mean these days they want too many clothes and things but I mean we just make do with what we had.

So what did you do for fun?

Well as I say on the back of the motorbike and I’d go down to Bacton with my husband and we’d walk along the beach and do things like that.

You’ve obviously somebody who’s enjoyed having fun where you’ve worked. Where was the best place from that point of view?

You were all able to enjoy working together there.

We were, everybody was friendly, so friendly.

Some I still see. One girl, it was very sad, she died about a year or two back. Her name was Margaret and she was very friendly. But I got on with all of them really.

One or two of them who worked there anyway, threw confetti over me on my wedding day. Put all confetti down my back – the box as well, I think. That’s the sort of characters they were. ‘I’ll get you on your wedding day, Ruth.’